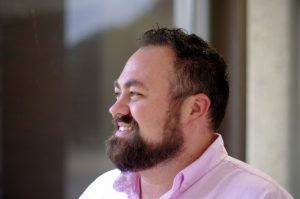 Joel Crombez is currently a Ph.D. candidate in Sociology with concentrations in Theory and Political Economy under the direction of Harry F. Dahms at the University of Tennessee – Knoxville.  Originally from the suburbs of Detroit, Michigan, he lived for short periods of time in numerous countries and states across the Americas.   Several years were spent in Ecuador and Colorado, where, in 2007, he earned his B.A. in English and Sociology at the University of Colorado – Boulder.  In 2015, he defended a Master’s thesis, titled After the Human: Theory and Sociology in the Age of Fractal Ambiguity, Dromology, and Emergent Epi-spaces, which built on French social theory to better understand how as technological advances recalibrate spatial awareness, ontological and epistemological perspectives change, ultimately demonstrating how modern society can be read as the development of a posthuman reality.

His current research retains an empirical focus that bridges political economy with science and technology studies, specifically looking at how the logic of capital guides technological development and the impact this has in many dimensions of social life, from everyday life to the planetary system.  From a theoretical perspective, his work is a synthesis of Lacanian psychoanalysis, Frankfurt School critical theory, and French social theory.  He is interested in meta-theoretical analyses of how an agenda in critical theory could be advanced given the institutional framework and limitations on what constitutes science in the contemporary academy.  Building off of these foundations, his doctoral work is geared toward developing a methodological and theoretical framework for addressing the atemporality of modern political economy, and the myriad and seemingly permanent anxieties that arise as the space of the human is eroded by and subservient to a logic of capital which prioritizes its own technological extension over the well-being of its biological subjects.

Joel Crombez and Harry F. Dahms co-authored an essay, entitled “Artificial Intelligence and the Problem of Digital Ontotheology:  Toward a Critical Rethinking of Science Fiction as Theory,” which appeared in the Bulletin of Science, Technology and Society in 2016.