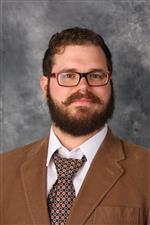 Nicholas Hauman is Assistant Professor in the Department of Sociology and Criminology at Benedictine College in Atchison, Kansas.  He previously taught at Bethany Lutheran College in Mankato, MN as Assistant Professor of Sociology and was the co-director of the Center for Intercultural Development and Resources (CIDR).  He teaches courses on sociological theory, social stratification, social movements, death and dying, the family, sociology of religion, global social problems, and cultural anthropology.

Nicholas’ dissertation research analyzed flash mobs to explore the relationship between social systems, as described by Niklas Luhmann, and human agency through the development of the concept of psychic confluence−a phenomenon in which both individuals and social systems simultaneously influence and alter one another through structural couplings. His current research explores the improbability of negation through analysis of terrorist attacks, fashion magazines, and the early origins of social theory.

In addition to a Ph.D. in sociology from the University of Tennessee, Nicholas received a M.S. in sociology from Virginia Commonwealth University, certificates in interdisciplinary social theory and applied social research. He received a language intensive scholarship from the Deutscher Akademischer Austausch Dienst (DAAD) and studied in Marburg, Germany. Nicholas has served either as editorial assistant or on the editorial board for Current Perspectives in Social Theory since Vol 31, a conference organizer for 13th annual meeting of the International Sociological Theory Consortium (ISTC), and as a reviewer for the Annual Speechless Film Festival in the feature film category since 2015.  He has presented papers at the Subjectivity and the System Conference at Brown University as well as at Eastern Sociological Association, Midwest Sociological Society, Southern Sociological Society, International Sociological Theory Consortium, Michigan Sociological Association, and the Sociologists of Minnesota conferences.